Quintessence / Sacred Union Vimana
2015
mixed media wired light sculpture
approx 35" dia.
This Vimana, the fifth of the series, is the vehicle of orgasmic ecstasy through which a heightened state of awareness could be reached. It celebrates the glory of sexual union as the quintessential expression of creation, the all devouring power of desire which generates renewal through the process of consuming.
The Quintessence/Sacred Union Vimana emerged (as they all did) as a three-dimensional mandala based on the number five, organically developing into a gleaming erotic universe comprised of different levels of animals, plants and god-like beings engaged in erotic play.In classical and Medieval philosophy, the “fifth substance”, in addition to the four elements was thought to “compose
the heavenly bodies and to be latent in all things”.
The number 5 is the symbol of the Human microcosm, number of Venus, the Greek goddess of love, and the nuptial number of love and union. Even more importantly, five symbolizes “Hieros gamos”, or the “sacred union” between the feminine (2 even) and the masculine (3 odd) in the Greco-Roman and ancient Near eastern traditions, as well as in Tantric Buddhism culminating with a ritual performing the sexual unity of the two creative principles. In Tantric Buddhism of Nepal, Bhutan, India and Tibet, Yab-yum is a ritual of the male deity in union with his female consort. The symbolism is associated with Anuttarayoga tantra where the male figure is usually linked to compassion (karun&#803;a&#772;) and skillful means (upa&#772;ya-kaus&#769;alya), and the female partner to 'insight' (prajn&#771;a&#772;). Yab-yum is generally understood to represent the primordial (or mystical) union of wisdom and compassion. (source:https://en.wikipedia.org/wiki/Yab-Yum )
The esoteric description of a sacred union in Bhuddist and Tantric literature could be described as something like this: The rising snakes of Kundalini (ecstatic energy) are thus activating the different chakras, or energy wheels from root to crown, calmly observed by a meditating Shiva (Creation and Destruction) and allowed to pass through the third eye gates of Kali – Time into the bliss of eternity.
Sexuality and erotic energy is what makes this world, in fact this whole universe manifest. It is desire, the lust for sublime pleasure through copulation that brings life forms into existence.
PREV / NEXT   5 / 12
BACK TO VIMANA SCULPTURES 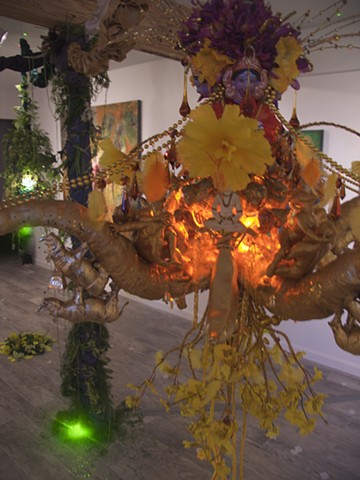