Tree of Life/ Mother Herb Vimana
2015
mixed media wired light sculpture
approx. 20" dia.
The third, or “Tree of Life / Mother Herb Vimana” evolved as my intention was to express our human dependency on the life-giving nature of blue-green, which is the color of our planet seen from space.
The regenerating nature of photosynthesis, which is essentially our Earth’s breathing mechanism, is one of the most magnificent evidences of intelligent universal design. It has been universally known and later confirmed by modern science, that since the beginning of human history the color green has had an incredible healing effect upon mind and body.
Since the beginning of time, green has signified growth, rebirth, and fertility. In Celtic myths the Green man was the God of fertility.Later in the millennium, Early Christians banned green because it had been used in pagan ceremonies. In Muslim countries, it is a holy color and in Ireland, a lucky color. In ancient Chinese heavenly worship rituals, jade and silk offerings in the color of blue-green were used. (sources:http://www.colormatters.com ; http://www.columbia.edu/cosmos/irc/emper
The fairy-like structure of this Vimana incorporates things like erotically shaped vegetation, “magic” herbal plants and crystalline "dewdrops" amongst which lurks the proverbial snake, pointing to the irresistible allure of taboos ("forbidden fruit", "forbidden knowledge") and the nostalgia for innocence lost.
PREV / NEXT   3 / 12
BACK TO VIMANA SCULPTURES 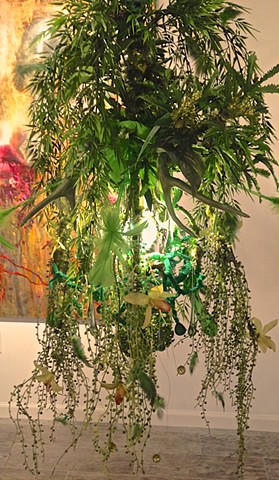