DMT/Shroom Vimana
2015
mixed media wired light sculpture
approx.22" dia.
The second in the series is the DMT, or Shroom Vimana, alludes to a dream-like, hallucinatory states of being, where there is a definite separation of the physical and the astral body, or what is sometimes described as out of body, or near death experience.
DMT, a compound naturally occurring in the human body and a powerful hallucinogen, is found in hundreds of plants, and every mammal studied so far. It is also manufactured by the human body, reportedly in the what is known as the pineal gland situatied in the center of the human brain, however not part of it. This gland has been reffered to in ancient scriptures as the third eye, and in fact it has an ocular structure. It has been known that many native shamans have used herbal preparations to help enter this state where a communication with the “spirit worlds” is possible.
In more recent years, In his seminal book DMT: The Spirit Molecule subtitled A Doctor's Revolutionary Research into the Biology of Near-Death and Mystical Experiences, Dr. Rick Strassman suggests that after death, decomposing pineal tissue might empty DMT directly into the spinal fluid, allowing it to reach the brain's sensory and emotional centers and causing residual awareness. "The consequence of this flood of DMT upon our dying brain-based mind", Strassman writes, "is a pulling back of the veils normally hiding what Tibetan Buddhists call the bardo, or intermediary states between this life and the next". Michael Persinger and D.R. Hill have also argued that mystical experiences of all types (including NDEs) might be caused by circumstances that trigger the release of DMT from the pineal gland, and near-death experience researcher Pim van Lommel has written about the similarities between DMT trips and the NDE. (sources:wikipedia.org/wiki/Near-death_experience ; http://www.crystalinks.com/nde.html
These are only a few of the recent discoveries emerging and challenging conventional understanding of our neurological responses, while strangely, yet justifiably confirming the teachings of ancient cultures from all over the world about the ability of the human “soul” to travel to otherworldly dimensions as well as the beliefs in reincarnation and cyclical and intertwined nature of existence, perhaps even beyond death.
The Shroom Vimana is my interpretation of a ritual vehicle for such dream-travel.
PREV / NEXT   2 / 12
BACK TO VIMANA SCULPTURES 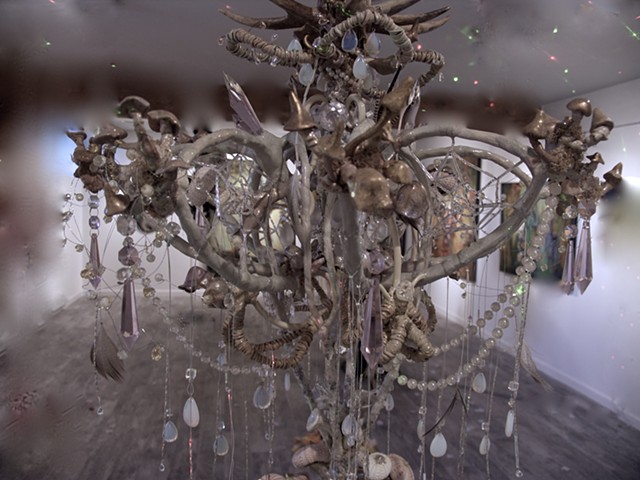